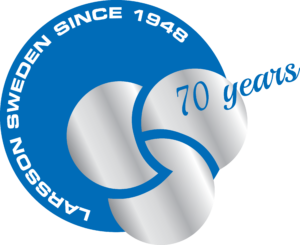 In the end of the 1940s, Jörgens father, Gösta Larsson, had become engaged in his father, Erik Larsson, work. An education at technical college and some clever inventions resulted in several patents of his own for starch machines.

After his military service Gösta wanted to work in the starch industry, but his father advised him against it:
“He said it was a tough trade and that I ought to leave it alone. With 300 Swedish Krona as my only capital, a bank loan as out of the question, I decided to make a go of it anyway and to start up the company again. The focus was on repairs, joinery and concreting. It was a tough time and you had to cut your coat according to your cloth,” Gösta Larsson remember.

In 1950, he built his own workshop and also began manufacturing his own machines. At that time production was generally on a small-scale and there were over 140 starch factories in Sweden.
“But today there are only a few large factories left. After 1950, a lot of work went into building small factories into bigger ones,” Gösta explains.

The actual processes were also developed and it was Gösta who led this work, with his position becoming more consolidated both in Sweden and the rest of Scandinavia. It became more and more difficult for their competitors.
“We had got off to a good start. Our products were more developed and adapted and today as is well known we are a world leader and we don’t intend to relinquish this position,” Gösta said.
The experiences of the past are still useful in the company’s strategies.
“It is very satisfying to see how the company continues to develop. The starch industry is a small sector in every country and it has been very exciting as a small player to become established and battle with the giants on the international arena. We have been successful!”

LARSSON’s 70-year history is summarized in a special edition of LARSSON Magazine, click on the image below to read the digital version. 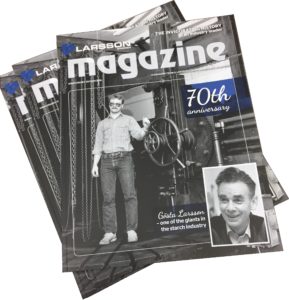 www.larssonsweden.com which is our public website, like many other websites, can store or retrieve information in your browser, usually in the form of cookies. This information that may be about you, concern you, your interests, or your internet device (computer, tablet, or mobile) is mainly used to make the site work to your expectations, and to give you a more personal experience of the web, as well as to store your previous choices to memory.

Cookies for performance
These cookies will help us to find out how our visitors use our website, so that we can judge how well it works and what can be improved upon. For instance, by using these cookies, we can find out which web pages are the most and least popular. They measure the number of visitors, how long they spend on our website and how they found the website in the first place. We can find out what we are doing well and what we can do better, as well as ensure that the web pages are loaded quicker and are correctly displayed.

All information collected by these cookies is anonymous and not linked to any personal information about you.

If our use of cookies presents a problem, problems for you, you can take action to prevent them from being applied. You can also change the settings in your browser to block certain types of cookies.
For more information on how this works, you can look in the browser’s help information section.

G. Larsson Starch Technology AB would like you to leave certain information about yourself for our business operations. Your personal data is processed and saved by us so that we can fulfil our committment, take contact or provide the requested information. The personal data that may be used is primarily the information that you submit to us, directly or indirectly, when contacting us.

The data that we collect and use includes name, telephone number and email address. You decide whether you would like to provide any information to us. The data will be used only by us, except for those cases where we are dependent upon a third party to fulfil a delivery, in which case they will also be able to use the data. We intend to use the data as long as you are a customer or have expressed a wish to receive information or offers from us.

You have the right, under Section 26 of the Personal Data Act (1998:204), to be informed, free of charge, once a calendar year, and after a written application has been submitted to us, about which of your personal details we are using, and how we are using them. You also have the right to request a correction in accordance with section 28 of the Personal Data Act regarding personal data that we are processing about you. You are also always entitled to withdraw your consent in writing. If you consider that your personal information has been processed incorrectly, you have the opportunity to file a complaint with the supervisory authority (Data Inspection).